To help Qian Qian and her fellow pandas, 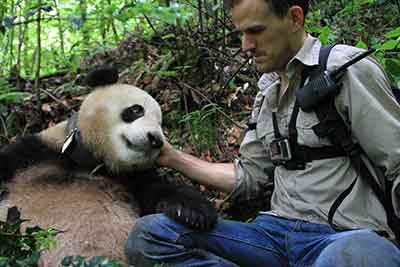 “The first time I met her was in March 2014, a few days after I arrived in China. As I entered the cub enclosure at Moonlight House, I saw her playing with seven other cubs. At first, they were almost impossible to distinguish from one another, but after a few days, differences in their personalities became clear.

Some cubs had little interest in interacting with me and others played too hard. Ouch! Even at only 6 months of age a panda can give a nasty bite.

It quickly became clear to me that Qian Qian was different. She was interested in me, often engaged in play with me and the other cubs, but wouldn’t bite me too hard. Unlike the other cubs, and all others I have interacted with since, she would also become affectionate, and would climb into my lap to fall asleep. Choosing her for the program was a great decision. Working with her and seeing her grow over has been one of the most amazing experiences of my life.” 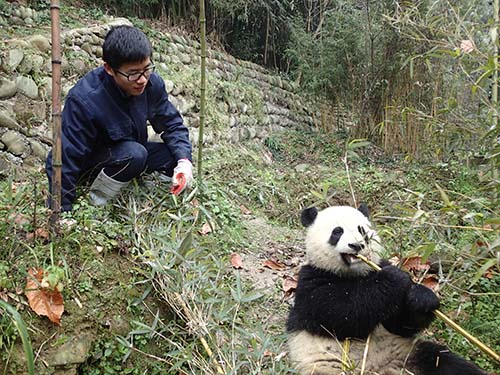 The film Pandas does a beautiful job of integrating actual documentary footage of Qian Qian’s rescue into an IMAX large screen 3D format. This technical mastery is so complete that a viewer might think that the rescue footage is a "re-enactment".  It’s not. The footage was taken in real time and shows us the unprecedented tracking and rescue of a badly injured giant panda in the wild.

The footage also displays an act of true heroism by a Chinese project scientist, Wenlei Bi, who had helped raise Qian Qian from a cub. Xiao Bi, as the team calls him, led the field team through the forest on its search for Qian Qian. Despite his personal fear of heights and the cold, driving rain, he repeatedly climbed up Qian Qian's tree to give her the medicine and honey water that kept her alive. He and Jake Owens were the only people she would allow to approach her.

Xiao Bi stayed with Qian Qian in the forest under adverse weather conditions for days until Jake arrived to help with the rescue. Together they persuaded her to come down from her tree so they could feed and care for her on the ground.

Qian Qian’s rescue was living proof of the importance of the soft release reintroduction method. The bond Xiao Bi and Jake forged with Qian Qian enabled the project team to save her life when she needed them most.