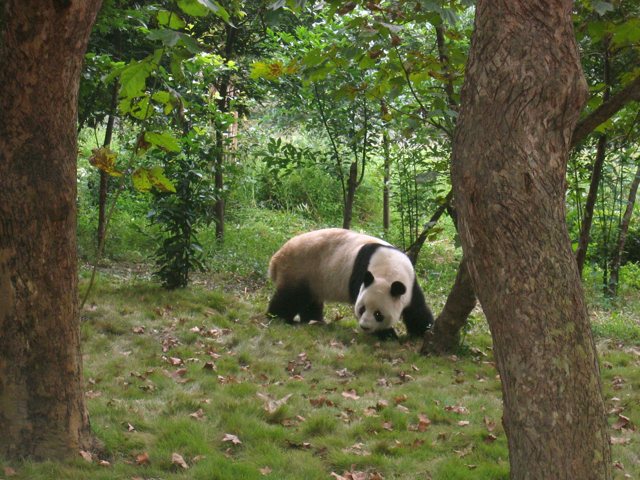 The Global Cause team and its partners at the Chengdu Research Base of Giant Panda Breeding (CRB) in Chengdu, Sichuan China and Drexel University in Philadelphia, PA recently published an important article in Nature- Scientific Reports on the threat of dogs to giant pandas in China.

The team was headed by Dr. James R. Spotila, Vice President of The Global Cause Foundation and Betz Chair Professor of Environmental Science, at Drexel University. The scientific research was led by Dr. Ramana Callan, Postdoctoral Associate at Global Cause Foundation and now Assistant professor at Miami University of Ohio. She was Dr. Spotila’s postdoc when study was done. Dr. Jacob Owens, another Postdoctoral Associate at Global Cause Foundation and now Director of Research and Conservation at the Los Angeles Zoo led the field work. He was also Dr. Spotila’s postdoc. Mr. Wenlei Bi played a key role in the field work. He is Dr. Spotila’s PhD student at Drexel University. Dr. Benjamin Kilham, Director of the Kilham Bear Center in Lyme, NH inspired the study and provided guidance on dog behavior and interactions with bears. He did his PhD with Dr. Spotila at Drexel. Hou Rong is Director of Research at CRB. She directs the overall giant panda reintroduction program at the CRB and oversaw the entire study.

Dr. Zhihe Zhang was Director of the CRB and provided the vision and overall direct ion of the study.

Findings:  Giant pandas (Ailuropoda melanoleuca) were historically hunted using dogs and are currently threatened by free-roaming dogs and their associated diseases. Giant pandas (Ailuropoda melanoleuca) require a minimum habitat size of 114 km2 to enable long-term persistence of local populations. Most nature reserves set aside for giant pandas exceed this area requirement. However, nature reserves are often closely connected to human settlements. Dogs can roam 10 km in a night from their village and there are feral dogs in many nature reserves. Predation, harassment and disease transmission by dogs can have large-scale edge effects in both fragmented habitats and protected nature reserves. A GIS analysis at Liziping Nature Reserve indicated that much of that reserve was within the range of free roaming dogs. Two captive born giant pandas released there were attacked by dogs. Dogs in local villages harbored many diseases that could be transferred to pandas by dog bites. So that reserve is much smaller in reality than in its official boundaries. We expanded that analysis to include all giant panda reserves in China. That analysis revealed that across the entire giant panda range 40% of panda habitat is within the foray distance of dogs. Therefore, the area available for giant pandas in nature reserves in China  is only 60% of the official protected area! Reserves designated for the release of translocated pandas should receive priority consideration for dog control efforts. Dogs have to be removed from Giant Panda Reserves if pandas are to survive in the wild. Only by understanding and managing complex interactions between humans, domestic animals, and wild animals can we sustain natural systems in a world increasingly dominated by humans.