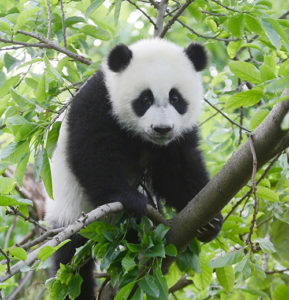 As we concluded in Part 1, there’s been recent progress in avoiding the extinction of pandas in the wild, but we should recognize that wild pandas are still very much at risk.

Giant pandas were first classified as Endangered by the IUCN in 1990 after the Chinese government released the results of its second National Giant Panda Survey (National Survey), which indicated that the total population of wild pandas had dropped 55%, from 2459 to 1114 individuals, over the previous decade. In 2004, China’s third National Survey reported a 43% increase in the total number of wild pandas. However, because of uncertainty in the methods and results, the IUCN still considered pandas to be Endangered in its 2008 assessment.

The most recent National Survey was conducted from 2011 to 2014, with results released in 2015. It found the population of wild pandas had grown by 17% since the 2004 survey (to just under 1900 pandas) and confirmed that pandas now live in 6 different mountain ranges. Under the IUCN criteria, this showed progress in avoiding extinction.

Improvements in the wild population don’t happen by magic. The Chinese government has been working for years to protect giant pandas and their habitat. Hunting, which was a significant threat to the future of pandas, has been largely eliminated due to strong penalties enforced by the government. Since the 1960s, China has created 67 reserves for giant pandas (20 in the last 17 years alone), comprising 3.4 million hectares of land (an area larger than Belgium). 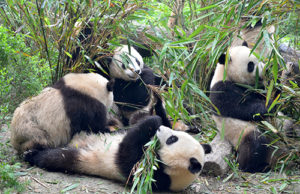 While this progress is a step in the right direction, wild giant pandas are still very much at risk of endangerment. Many of the giant panda “reserves” in China are still used for logging, mining, or other extractive industries, and most patches of suitable habitat exist in isolated fragments, limiting the ability of pandas to travel between them to share genetic material or escape local disturbances. This reduces their suitability for pandas.